Carrying on from where i left off from Day 1. After flagging off, there was this period of confusion for me, of what exactly to do. Should i look at the Speed chart or the tulips, or both? Full marks to MV for bearing with me and his patience. Soon we settled into a pattern, and our co-ordination and communication went on improving as the days went by.
One of the bikes being flagged off: 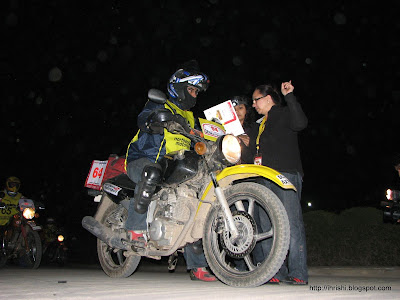 Little did i know that it was the beginning of the longest day, and that it was going to turn out to be the toughest of the entire experience. All was well till we approached a tulip called Leopard Country. There due to an growing error with our GPS odometer, we took a wrong turn into a forest. A couple of kilometers in the forest, we realised that the tulips (landmarks to follow) were no longer matching, and took a U turn out of the forest. On coming back to the main road, we met up with a Santro who told us that the road ahead was blocked and the A Star guys from Team RPM, Maruti Suzuki were having a different kind of adventure. Turns out that the locals had heard a lot of cars passing by, and mistook them to be dacoits. So they just fell a tree, and blocked the entire road. A gang of 40-50 odd villagers, armed with axes, knives and swords surrounded the competitors, and demanded an explanation. Its only after a lot of pleading and cajoling that they were allowed to go.

In the meanwhile, we were struggling to find our way out of the forest. By that time, 4-5 other cars had joined the party with everyone pointing in different directions. It was @0200hrs, and comfortably cold. The poor Punto took quite a beating here. This is where we lost the first of our mud flaps, and the entire cladding of the rear left wheel arch. But hats off to the engine guard, and the tank guard, none of the stones caused any damage. The Punto is not just a looker, its tough too.

This is also where, we heard 'supposedly' big cat noises, saw jackals, deer. Was an experience.
Here's the sights of the forest. This is where the road ended. 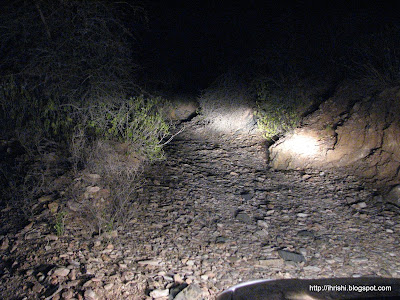 Since we had nothing else to do, we managed do do a little bit of photography... :) 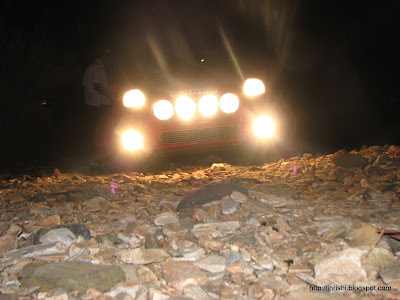 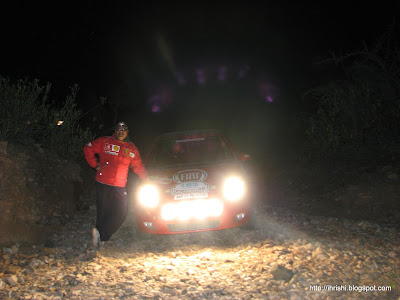 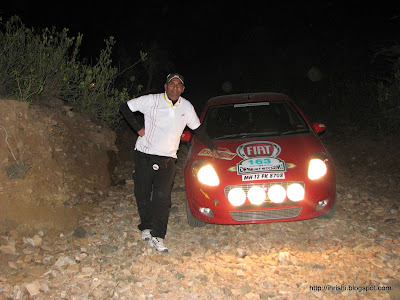 Eventually, we decided to turn back and restart the entire track. And guess what? We had missed the actual turn by 15-20 meters. :-[ So much for navigation!
Rest of the journey was a blur, since MV decided to make up for the lost time. I distinctly remember a patch of twisties with around 9-10 hair pin bends within meters of each other. The way we tackled that particular patch would have made other cars wet their (umm..) radiators, but the way Punto took it was really amazing. That car is a handler. I remember holding (hanging) on to the handle with both hands, all the while wishing that even i had a steering wheel to hold on to.
We also made our first friends of the trip while waiting for a free zone to get over. We, along with Manish and Vishal, who were driving in a Ford Fiesta, would then onwards form convoy of sorts when the rally got over, and we were kind of coasting back to the hotel every day.

It was red bull that kept us awake and alert that night. But i am quite sure, that even without red bull, there was hardly ever time to even think of sleeping. there was so much to do! Calculations, re calculations, navigation etc.

Soon, it was day break, and this is where i saw one of the most beautiful sights of the entire trip. We had entered in a typical Rajasthani village, with small houses, narrow roads, sand everywhere. And Peacocks. I have seen peacocks only in zoos. And here, there were peacocks on the road, on rooftops, on gates, and even on garbage dumps. That is also when i found that peacocks are not that fast too. There were many times when we had to slow down to let one of the majestic national bird cross the road at their own pace. Damn! Why did the peacock cross the road?
But this was one of the highlights of the trip, and this memory is something i will never forget.

Eventually, after a gruelling night, we managed to reach Teja Garden, totally tired, drained and happy to have completed the first leg. We had a couple of hours to spare here. Once we had breakfast, and more than 3-4 cups of tea, we tried to have some shut-eye. Before we knew it, it was time to go again. This particular leg was going to be quite short - @100 kms, and we were looking forward to reach Gajner Palace near Bikaner.