This is what I will be riding in for the Desert Storm. :-) 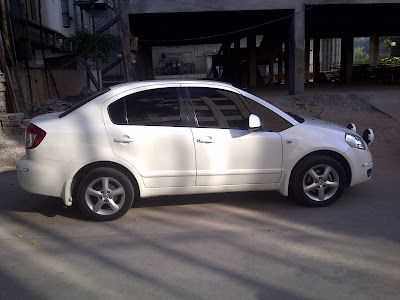 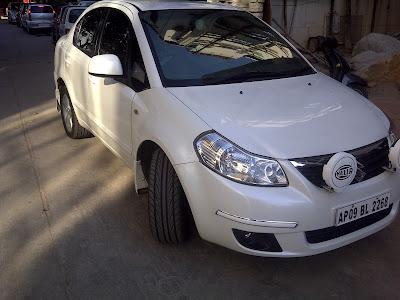 Following are the best locations to view all the action, up close and personal.


February 21st:
Hotel Cambay Grand, Ahmedabad
Time: 0800~1800
This is venue for scrutiny and documentation checks. You can be there to watch all the rally cars in their colourful livery.

Lakhervelara (Indraprastha), Bhuj
Time: 1800~2000
Watch the start of first special stage. It is a night run.

February 23rd:
Tropic of Cancer, Khavda Road, Bhuj
Time: 1000~1400
Watch the stage mid way as the rally crosses this road from west to east. You can park near by and walk in to the stage in either direction to catch more action. Also watch service park action after the stage is over.

Bus Stop, Lorai, Khavda Road, Bhuj
Time: 1030~1300
The rally crosses the road from east to west here. They enter the firing range with absolute flat out White Rann towards the west.

Lakhervelara (Indraprastha), Bhuj
Time: 0700~1100
Watch the flying finish as the rally ends the Rann stages and moves to the Thar Desert.

Fatehpur on Barmer-Jaisalmer NH15:
Time: 1800~2100
Watch the start of section.
You can also go to Dungri in between the stage from Vanjorai to watch the fast paced action and make some excellent shots. This is a night stage.

February 25th:
Devikot-Rasla
Time: 0700~1000
Watch the stage start and then first DZ-FZ action. Devikot is 40kms from Jaisalmer towards Barmer. Side road from here goes to Rasla-Sankra-Pokharan

Pokharan:
Time: 0800~1300
There are three points near Pokharan where you can catch the rally as it crosses the small country roads.
The first is at Naniyayi on the Pokharan-Sankra road. Easy to walk in to the section with wide open spaces. Excellent day time shooting possibility.
The second is Meghlaon-Ki_Basti on the Pokharan-Phalsund road
The third is at Jhaleria dry lake bed. Really fast paced shots if you are willing to walk a bit in to the lake bed after parking your car in tarmac road.

Kana Ji-Ki-Sird, NH15 Bap:
Watch the second stage of the day running next to the railway line. If you are lucky you may get a shot of rally racing a train! K'Sird is about 15kms from Bap, between Jaisalmer-Bikaner.

Lalgarh Palace, Bikaner:
Time:1800~2300
Capture the evening and night shots of the rally as it winds up for the day against the magnificent backdrop of this heritage property.

February 26th:
Sheruna, NH11, Near Bikaner:
Time:1100~1900
The rally action is all around this sleepy village about 50kms from Bikaner towards Jaipur. The two stage starts are within 10~15kms from here. As are three DZ-FZ zones.
If you are willing to walk 3 odd kms in to the stage starting from Napasar you can catch spectacular flying cars as they come down a steep dune.
Though the best video to capture would at Pundrasar on a side road about 20kms away. Watch the cars as they struggle to climb a dune.

February 27th:
Ringus, NH11, Near Chomu/Jaipur.
Time:0200~0400
The last stage of the rally is a night stage that ends here. You can watch night action as the cars come to stop at end of stage through river bed.


Courtesy Sudev
Posted by Hrishi at 2:32 PM No comments:

The start order for the Maruti Suzuki Desert Storm 2011 got published yesterday. We are #1 in the start order, with competition number 151.


I hope that this is not the only leg where we start first :-)
Posted by Hrishi at 1:48 PM No comments:

Day 1
Ceremonial flag off by VIP's at Ahmedabad followed by a longish transport. A single stage is all that you will face today.
For Xplore the competition is continuous. From the word "GO" they are having speed zones and distances flashing by. Navigator has to be busy guiding and doing all important calculations. Drivers have an easy time today as all they have to do is follow the instructions barked at them from the left seat. An all tarmac day.
So where is the challenge? A longish day and speed zones will test your patience and will to win. The day ends at White Rann Camp.
Day 2
The second day is likely to see maximum action and attrition! A single stage touching 300 kilometers is the highlight of the day.  This is longest stage ever run in a rally in India.
We are not waking you up early so that you get to enjoy the camp site at White Rann. Looking west you will see almost unlimited expanse of whiteness. Something to be remembered. We only hope it is not as cold as last year when every one was early as they could barely get to sleep through "chilled" night. Carry your sleeping bags.
Now for the rally. Be prepared for all sorts of challenges. It is a day which will demand utmost from the driver and test skills. The Navigator would be ready to throw in the towel when confronted with the thickest road book. The car would be subject to longest off the road action ever in a TSD format. Some planned stoppage will also allow you to see Xtreme action upfront. Have your cameras and camcorders ready. You never know when you may catch some "never to be forgotten" action.
If it is a clear day you will be in treat for a glorious sun set. We guess that is clue enough to where you will be headed. However do not spend too much time in viewing this as you still have to reach the camp and get enough rest and sleep for the next day's longest run.
Day 3
The longest day for the competitors in terms of sheer distance to be traveled. Switching between a section in the Rann to another in the Thar outback.
Out from the Camp in the White Rann and straight on to tricky drive on a winding, sometimes hard sometimes sandy surface. The Navigators will be challenged to max but if they keep their cool this is rather easy exit. Drivers will have to watch out for the sandy surfaces and plan their speed accordingly. Combination of fine dust, raised by other competitors, and sun over the horizon adds to the difficulty impeding vision drastically. A stern warning - do not wander off the path as there could be unexploded shells from firing practice done by border forces. Ask our recce team how interesting it was to watch live action.
This will be followed by a long connect on excellent expressway / national highway #15 the rally will connect the Great Rann of Kutch and The Great Indian Thar Desert. Lest you feel left out of action with all the highway driving - not really a TSD challenge - we use many of the back roads to reach Barmer. Here on of the Time Controls is located right next to "Bada Dhora" -  a big sand dune - that is site of annual desert Festival. We promise that you will have a bit of time here to click a picture or two and may be even climb the dune if you hurry.  Then onwards to Jaisalmer after this pleasant break.
Day 4
The second longest section of the Desert Storm 2011 will be run today getting out of Jaisalmer. And then a totally new section  specially laid out on your way to Bikaner.
An early morning start with ramparts of Jaiselrmer Fort as back drop. And almost immediately you'd be hitting off road surface. We start testing you on your desert driving techniques today. Some sand drifts across the track are sure test of how well you can adapt. Keeping momentum helps as does side to side rocking. Never brake hard, rather do not brake but roll to stop. Also remember that spade and rubber mats that are part of mandatory equipment? You may well get to use them.
We will try and give enough free zones to give you time to catch up with some food and water before we push you in to another long dusty trail along the railway track. Just pray that you do not get stuck again. Spade - where art thou!!??
Watch out from some tricky TC placements.
Penultimate day
A liesurely start can lull you in to false sense of security. The day will be full of activity and will not end at a night halt but will merge on to the last day!

The day will really test your sand driving skills. Be prepared to get stuck and dig your self out of the sandy track.
A mixture of sand, grit and tarmac roads will take you around Bikaner. This day's drive will test both the driver and navigator. A wrong call by latter can get you lost and a wrong move by the former can get you stuck! Watch out for extremely rough track specially served up to test your grit and determination around a temple of modern India - The Lignite Thermal Plant. And then around temple of different kind - the ever exciting Deshnook rat temple.
So is it okay if you have survived so far? Hardly. Now you will be tested for extreme sand driving. We are warning you.

Last Day
An extremely full of action day that will end with a grand prize distribution and a rally ball in Delhi. Would you survive till the end?

A short halt for breakfast on fringes of NCR. Of course this after an all night drive from Bikaner. It is not going to be a drive on National Highway. Be prepared to be sent up small state roads and even up no roads!
The darkness precludes any help from way side pedestrians or rural folks. So navigation has to be top notch but then by this time the survivors would have learnt all this. So we will work very hard to make this day difficult.
We would love to promise you that we will not include route around Khandela where more than 50% of the competitors lost their bearing. They kept on ringing CRO well past the dawn and saying "Maam, there was a railway line and there was a round about just like the road book says. But then we got lost and do not know where we are! What do we do?"
Be better prepared is all that we can say if you wish to finish on the podium and attend the glittering rally ball.

Posted by Hrishi at 9:48 AM No comments: 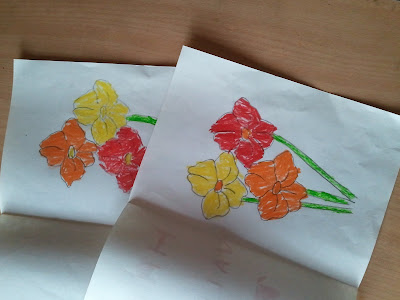 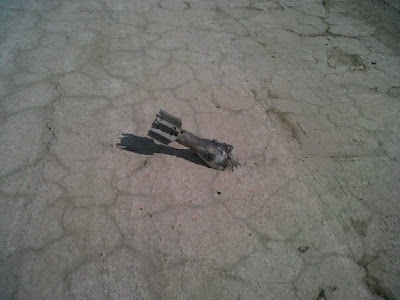 This is what the Recce team found on their trip. I hope this location is not on our roadbook. Anyways, I am chalking this up as another reason to navigate accurately ;-)

Posted by Hrishi at 8:56 PM No comments: