By this time, our provisional results were out, and we were placed at 7th place. (Not bad, we thought, considering the amount of time we had wasted the previous night.) So off we went to tackle Leg 1b. We had just done @20 odd kms, when the road book ordered us to take a left off the main road. This was a sandy road, and soon, there was no road. only sand. We were doing good till now, and had crossed all the sandy pits.

Up on the horizon there was a small dune which we had to cross. On crossing it, we saw a line of cars stuck in the sand. So, we had no choice but to lose momentum and pull off the road, where there was a little vegetation, and a chance of restarting. So we got down to investigate, and saw all the cars stuck one after the other. Soon, there was a crowd of the remaining cars behind us. Those people whose cars had gotten stuck tried every trick in the book, but did not manage to budge their vehicle.

Here are a few sights from that place:

This is where it all started. The first one bought the others down... 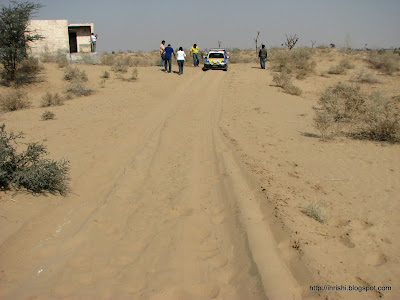 Only if it was that easy to lift and move cars..but MV gave it a try, though... 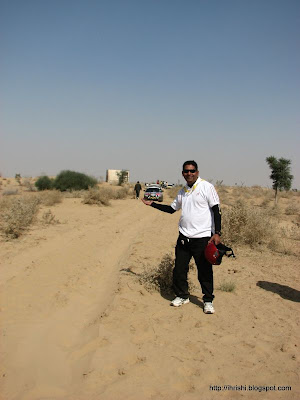 Isnt that a cool helmet? 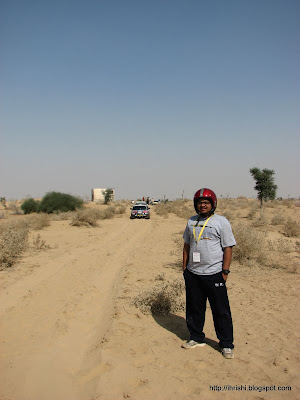 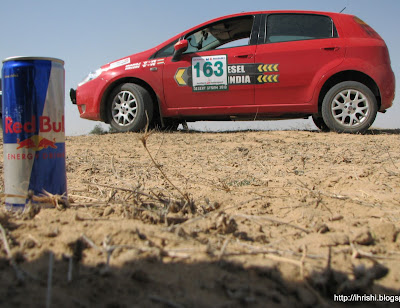 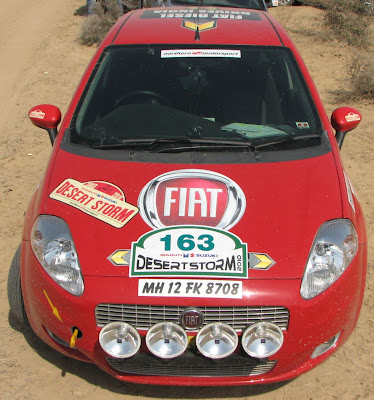 A bevy of stuck beauties... 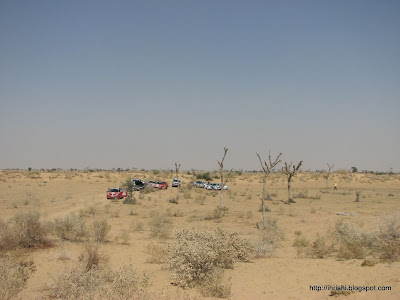 Finally me and Manoj lost our patience, and tried to find an alternate route out of the mess, and did manage to get to the very end of the sandy zone, only to be stopped by the Marshals since the Xtreme guys were expected in that zone. And thats it. Once we had lost all momentum, there was no way we could restart or take a U turn, and we ended up being stuck like the others. 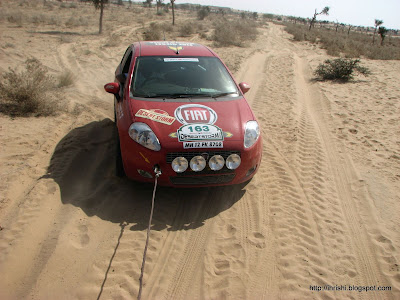 So, for the first time in the rally, we had to wait for the tractor and had him pull us out of the sand. This was not before we managed to snap a couple of tow straps and cable hooks.

Once he had deposited us to the firm zone, we found out that the leg was cancelled and we were to take the fast highway to Gajner palace where we were to spend the remaining hours.

The drive back was in a daze, and somehow managed to reach the beautiful hotel. Had some hot biryani, a much awaited bath, and it was time for some shut eye. Those couple of hours of sleep was the best ever. 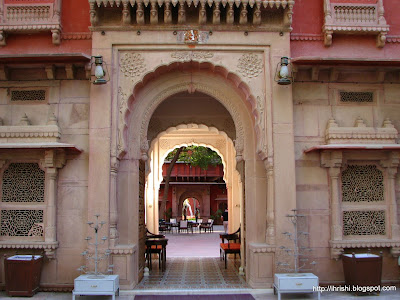 Trivia:
- One of the competitors ended up falling asleep while awaiting the tractor. Turned out that the rest of the guys got rescued, but i guess, he's still sleeping there.
- The army has an amazing participation. There are 4 army trucks supporting their xtreme participants
- In a rally, (or in real life as well) trust yourself. Specially, if the others say that there is no road ahead. Take that as a sign that you are on the right path.
- A rally is all about teamwork. Not just between the driver and the co-driver, but between other teams as well.