After sleeping like a log for the previous night, today was a supposedly easy start at 0900hrs. So after a heavy and leisurely breakfast, we were all set to start off again.

We started off in the 7th position, and were bullish about the future. After all, what worse could happen... right? WRONG.

Disaster struck just a few kilometers from start. We were in the thick of things, following the route, till it advised us to go off track, into the sand. Just before veering off the road, MV spotted all the cars before us stuck royally in the sand. However, he was committed to the turn, and still mananged to stop just off the road. Now we had the front tyres in the sand, spinning away to glory, while the rear ones were on hard surface. X-| 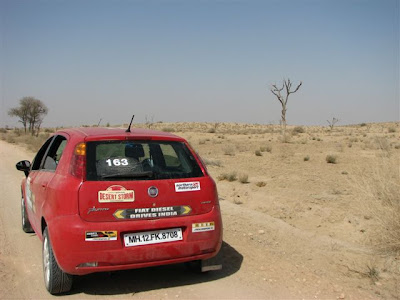 So out came the spade and managed to dig out atleast a ton of sand from under the tyres, and the engine bay. By that time, we had a few other cars join the fun... thankfully, they managed to stop in time, behind us. With the help of a few guys, we managed to push the car back onto the road. In the meanwhile, the leading baleno managed to get away with help from others behind him... so the race was on. 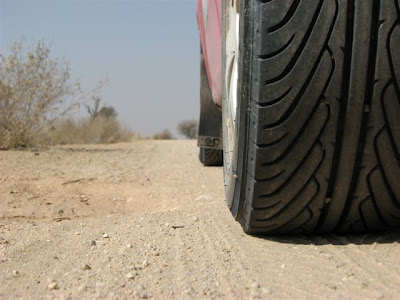 MV had another attempt with the sand crossing, only to get stuck right in the middle of the sand pit. Now we were too far for pushing it back and were royally stuck. Only if he had carried extra momentum...

Many other cars attempted different routes, and all of them got stuck at some place or other. Now all the routes were blocked. Team RPM of Maruti Suzuki got into the act and pushed Rana's car out of the sand, and he got away. The guys in the Innova managed to pull many cars out
of the sand, and all of them one by one went vrooming past us. That was one heartrending sight to see other cars - competitors - go on ahead.

Finally the organizers showed up, and pulled out one car after another. And then finally it was our turn to be pulled out. Since the Punto does not have a rear tow hook, I had to crawl under the car, to fix the rope on the dead axle... And as soon as the 4x4 gypsy put some tension on the rope, snap it went. Ah, there goes our race. Finally had to borrow a towing strap from one of the helpful participants -the A Star from Team RPM, and were finally out of the sand. This time
around MV took enough run up for an 747 to take off, and with lot of drifting, we were out of the sand trap, and back in the race. 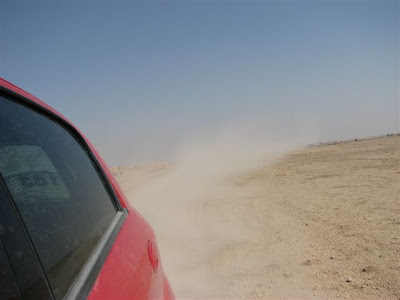 All the while, were were being watched by a couple of air-force MIGs. I am sure they were wondering what the brightly coloured cars were doing right in the middle of the desert. And I was hoping that their trigger finger was not itchy ;-)

There was one section which totally resembled Sholay, complete with a goods train, and a road going right next to it. The only thing missing were Gabbar Singh and his cronies... 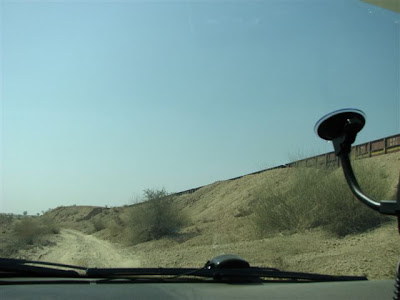 Somewhere down the road, we managed to get stuck again, but the Gods were kind this time, and we came to a rest just before a tractor. The only twist was that we had no towing rope! But thankfully, another car got stuck ahead of us, and they had a nice cable. So once they were pulled out, we were out in a jiffy. Barely lost any time there.

Then came the most challenging section for the navigator. We were supposed to spot a tower in the horizon, but there was nothing visible...yes, you could imagine a red and white tower, but that wouldent have helped. To make matters worse, the rest of the guys turned up and there was so much dust flying around that it was impossible to get your bearings. And all we had for directions were compass headings, and a screwed up odometer. 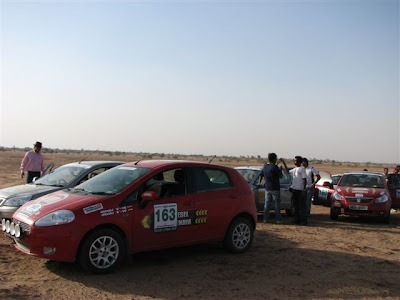 So all of us came together, and finally managed to find out way out of the mess. The irony was that we were on the right track, till we saw a few guys turn back, and we too decided to return :((

Rest of the drive was pretty uneventful till Jaisalmer. 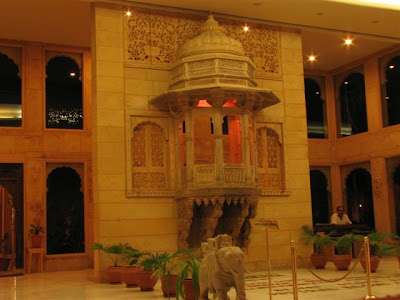 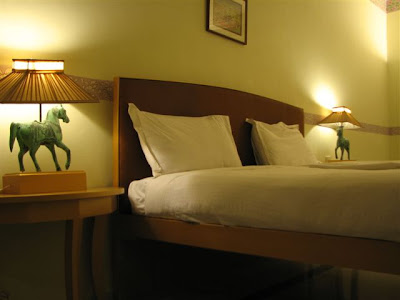